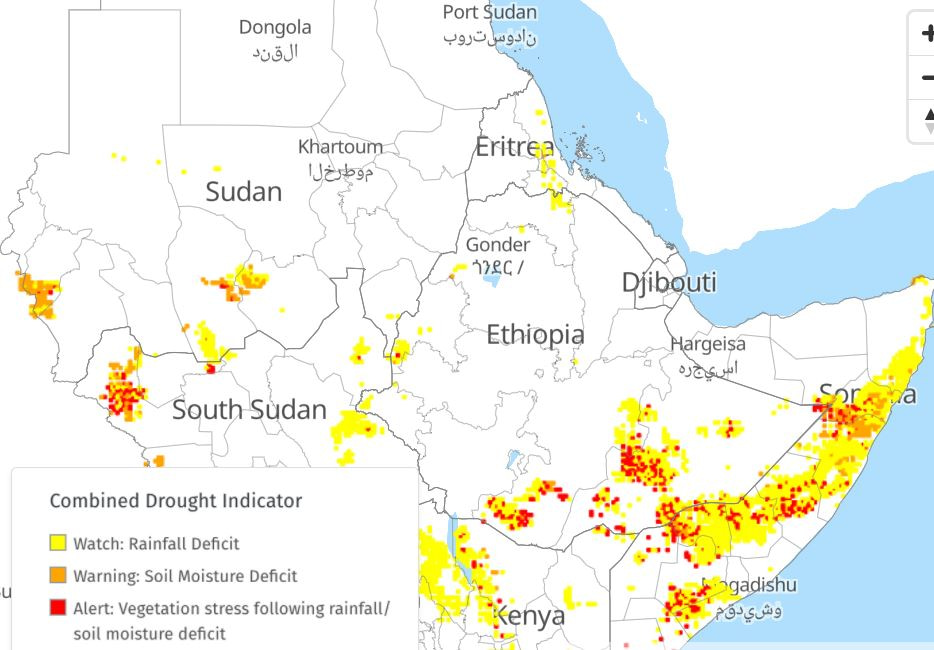 The East Africa Drought Watch (https://droughtwatch.icpac.net/) is the very first public transboundary system that uses near-real-time Earth Observation and Weather Information to monitor drought conditions in a region in Africa.
The system contains colour coded drought risk information by country and allows users to generate their own analysis and reports containing time series of visual information (e.g. drought risk, precipitation, vegetation, soil moisture). The system contains tools to allow users to assess the drought situation and the risk that current conditions pose to livelihoods. It allows for the user-friendly generation of graphs, maps, time series and will soon allow users to subscribe to receive email reports.
The system is built using Open Source technologies offering opportunities for scalability, flexibility, transparency and sustainability.
Drought has always been a well known and recurrent problem in Eastern Africa. The region is made up of more than 60% of arid and semi-arid lands (ASALs), and prone to frequent and severe droughts. The population of the region is considered to be among the most vulnerable in Africa. In the past droughts led to some of the worst humanitarian crises of the 20th century, such as the Famine that affected Ethiopia and Sudan in the 80’. The severe droughts in Ethiopia in 1973 and 1983 caused a total of 400,000 deaths and 150,000 deaths in Sudan in 1983. Just 10 years ago, in 2011, it is estimated that up to 260,000 people died because of drought.
Climate Change and environmental degradation are exacerbating the risks posed by Droughts. The region is already affected by chronic vulnerability, with persistent food and nutrition insecurity, widespread economic and social hardships, conflict and displacement.
Having functional public, transboundary Early Warning systems for Drought monitoring, and building them by making use of the latest technologies is key to increase the coping capacity of the populations of the region and their resilience to increasing climate extremes.
Read More