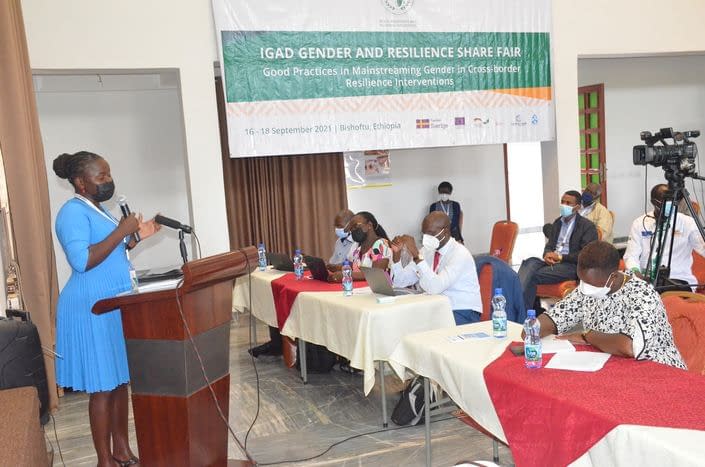 “When I was young, in my community, gender-based violence was the order of the day, and somehow it appeared like a normalised practice. No one was bothered about it. As time went by, I realised that culture was harshly blamed because of these practice,” said Ms. Betty Lomuria, Policy Analyst for Land and Natural Resources, Karamoja Development Forum. She was making a presentation at the IGAD Gender and Resilience Knowledge Share Fair held on 16-18 September 2021 in Bishoftu, Ethiopia.

Lomuria recounted an incident that occurred when she was eight years old. Their polygamous neighbour was at a village meeting to answer to why he regularly beat up his first wife. At the meeting, the first wife was asked only one question: “Do you come from a polygamous or monogamous family?”  When she responded in the affirmative, she was instructed to cooperate with her co-wives. That marked the end of the meeting and the moment when Lomuria became critical of her culture.

Later, while working for an international non-governmental organisation, she publicly criticised her community for practising early marriage. One elder called her aside and asked her why she was tarnishing the image of her community.

“Early marriage is not part of our culture. If it happens, it is a crime and someone is punished heavily,” he told her.

The elder cautioned her against criticising a culture she had not taken the trouble to understand well. He expressed concern that members of her generation, which was bound to take over from the elders as custodians of their culture, were such harsh judges of their own cultural practices. This conversation marked another turning point in Lomuria’s thinking.

“I became intentional on understanding my culture,” Lomuria told the audience. She said that after this conversation, she started looking for cultural practices that protect and empower women in Karamoja. Together with a friend, she even founded the Karamoja Cultural Association to celebrate the cultural identity of the Ateker people. She continued with this quest after she joined the Karamoja Development Forum, she continued her quest to understand the cultural practices.

“The common narrative is that women in Karamoja do not have land rights and that women do not own land. But to be clear, no one owns land in Karamoja,” Lomuria explained to the participants that the land tenure system is indeed customary. The elders help to manage the communal land in trust for future generations.

When a woman gets married, the husband is given a parcel of land to establish a homestead and a garden. The woman has exclusive rights to the garden. In case of divorce, she leaves her garden to her children.

Rather than focus on why women are not in the court of elders, Lomuria said that it would be more positive to exploit the space that has been created for women.

“How can we tap into this space to build the capacity of women so that they articulate their issues and strengthen the communication channels that have been established?” Lomuria appealed to the audience.

She urged participants not to dwell too much on the negative cultural practices, saying that the more they nurtured these negative practices and acquainted young people with them, the more likely it was that these practices would become entrenched.

Recognise that the traditional system is strong and has governed indigenous communities since time immemorial. Cross-border communities are grounded in these systems, it is difficult to break them. Rather than confronting these systems, we should identify existing opportunities to work with elders to propagate positive cultural norms.

Gender inequalities exist everywhere and the intensities vary from community to community. We should contextualise and align interventions and policies to the positive traditional systems for effective implementation.

Formal government systems should increase focus on the provision of quality social services that increase the resilience of communities in cross-border areas e.g. financial support to businesses, education, water and sanitation, access to information and market access.

Currently, positive cultural practices that empower and protect women are passed on orally by elders. Ministries of labour, gender and social development in all the Member States should document and preserve these practices. There should be a point of convergence of traditional mechanisms and the formal system.

IGAD Gender and Resilience Knowledge Share Fair was held on 16-18 September 2021 in Bishoftu, Ethiopia under the theme Good Practices in Mainstreaming Gender in Cross-Border Resilience Interventions in Karamoja and Mandera Clusters (IGAD Cluster I and IGAD Cluster III).

The share fair was held in response to a gender analysis of the IGAD Drought Disaster Resilience and Sustainability Initiative (IDDRSI), which revealed that gender-based roles, identities and attributes deepened the vulnerability of women and girls to climate-related shocks. The analysis identified capacity gaps in the understanding and appreciation of gender inequalities in IDDRSI, and by extension the ‘know-how’ to address them. The fair therefore aimed to promote an exchange of knowledge and good practices to improve gender mainstreaming in resilience interventions.

IGAD acknowledges the financial and technical support provided by the Governments of Sweden, the European Union Trust Fund through GIZ and the World Bank funded Regional Pastoral Livelihoods Project; as well as the contributions of IGAD Member States and non-governmental partners.