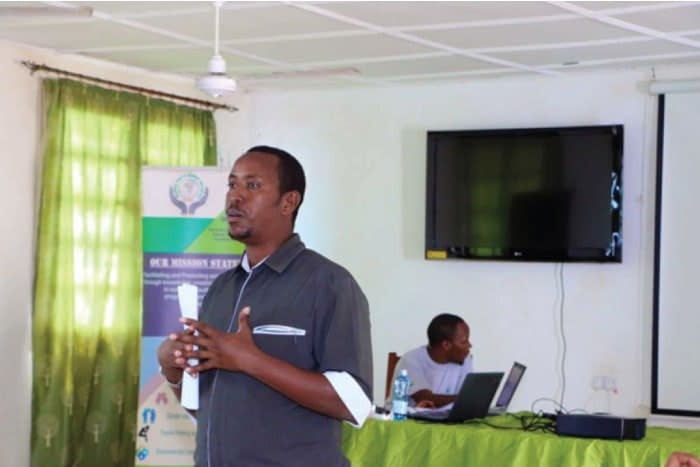 Unemployment, poverty, and illiteracy make young people vulnerable to radicalization and a life of crime. Noor Daher Ali was saved from going down this path by a youth group. Today, he heads an initiative that is fostering peace and development on the Kenya-Somalia border.

Noor Daher Ali, an ethnic Kenyan Somali, knows well the lure of Al-Shabaab. He grew up poor in this coastal town, where unemployment, poverty, and illiteracy make young people vulnerable to radicalization and a life of crime. When Al-Shabaab makes false promises of financial rewards and leadership opportunities, youth in Kiunga often believe the violent fundamentalist group.

Noor’s options were slim once he finished secondary school. He hadn’t achieved the prerequisites to attend university, which he wouldn’t have been able to afford anyway. Disillusioned and unemployed, he borrowed some commodities from a distant relative to start a business, but it didn’t go how he planned. In debt and hearing that he’d been reported to police for his dealings, he went into hiding. He felt intense pressure to turn to extremism, crime, and drugs as an exit strategy.

The only thing that saved him, he says, was a youth group he joined. The youth group changed the course of Noor’s life. In 2007, he decided he wanted to help other young people reject violence and crime by starting a youth group of his own, which he called Kiunga Self-Help Group. Pact soon began supporting Noor’s work through the PEACE II project, in which Noor had been a participant. PEACE II provided the group with a small grant as well as training.

Funded by USAID and implemented by Pact, PEACE II followed USAID’s original Peace in East and Central Africa, or PEACE, project. Now in its third phase, PEACE III is implemented by Pact and Mercy Corps. The project aims to strengthen conflict-management systems and build the capacity of regional and national institutions to stem cross-border conflict in Kenya, Somalia, Ethiopia, South Sudan, and Uganda.

The Kiunga Self-Help Group eventually hit a major stumbling block. In 2011, Kenya’s incursion into southern Somalia devastated communities along the countries’ shared border. Military operations increased in Lamu County, where Kiunga is located, leading to young people, especially those of Somali descent, being arrested, killed or kidnapped by security officers who assumed they were involved in extremist activities. Many of Noor’s friends had to flee to Mombasa or nearby areas to avoid arrest. The government instituted curfews and banned night fishing, a key local livelihood. Intense distrust grew between community members and security forces. The youth began turning against their own country and people to join Al-Shabaab.

Around the same time, USAID through PEACE II rolled out a youth empowerment program called Yes Youth Can, which aimed to empower youth through clusters called Youth Bunge Initiatives. Noor saw PEACE II’s support as a critical opportunity to restart his work. He gathered former members of his self-help group who were still living nearby and, with support from Yes Youth Can, transitioned his group into the Kiunga Youth Bunge Initiative (KYBI).

KYBI became one of PEACE II’s key beneficiaries and ultimate successes. With support from Pact, Noor and his KYBI colleagues learned effective peacebuilding strategies and approaches. Soon, KYBI transformed and positioned itself as a specialist peace-building institution in Lamu at a time when the region, ravaged by Al-Shabaab, needed it most. With this progress, KYBI won grants from Pact’s complimentary, UK government-funded BORDERS I and BORDERS II peace and security programs from 2013 to 2015. This helped the youth initiative grow and improve in its work, and in mid-2015, KYBI received a grant from PEACE III.

PEACE III’s support was critical for KYBI. In addition to the grant, PEACE III helped the youth initiative carry out an Organizational Capacity Assessment (OCA), a Pact capacity development tool that helps organizations assess their strengths and weaknesses, clarify their vision, plan for success, and ultimately take greater ownership over their future. Then PEACE III helped KYBI undergo significant institutional strengthening, including restructuring its programming approaches and resource mobilization strategies and improving its project management, finance, strategic communications and monitoring, and evaluation processes. Through this support, KYBI has become one of the most credible organizations operating along the Kenya-Somalia border. Now strong and stable, the youth initiative took on one of the biggest challenges affecting the area: a lack of coordination among cross-border security actors. KYBI began bringing them together, building trust and finding solutions to cross-border issues.

In the years since KYBI has had many other successes. It has received numerous grants from international donors to continue its peacebuilding and youth work, built trust and collaboration among key community stakeholders to prevent radicalization and violent extremism in Lamu, improved socio-economic opportunities for youth, increased literacy among elementary students, supported cross-border peace structures, carried out community environmental awareness and sea turtle conservation activities in Kiunga, and conducted trauma healing and capacity building initiatives for the local government in Raskiamboni, Somalia.

Under PEACE III, KYBI also established a cross-border security committee to address cross-border challenges in health, trade, and education. So far, more than 50 people from Raskiamboni, in Somalia, are now able to access medical care in Kiunga on a monthly basis. One young mother, Maria Ali, who gave birth in a maternity ward in Kiunga, explained her gratitude, saying, “If it were not for KYBI, I don’t know if I would be a mother today.”

In addition to health care, people in Raskiamboni are better able to access food since KYBI has been helping to resolve issues along the border. Abdullahi Diriye, the District Officer in Raskiamboni, confirms this, sharing that his office and security agents now communicate smoothly. For Noor, who remains at the helm of KYBI, the difference he has made in his neighbors’ lives is the only reward he ever wanted. But he has received other recognition, too. Earlier this year in New York, he was honored with an award from the Search for Common Ground for his contribution to peacebuilding along the border.