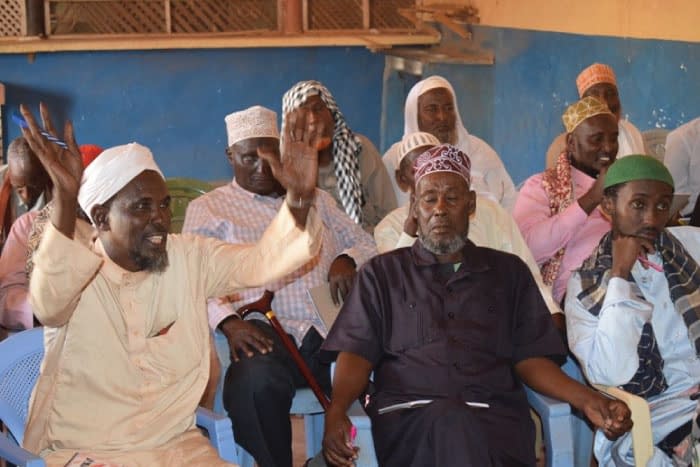 Over the past year and a half, the RASMI program has worked with traditional leaders from BeletHawa in Somalia, Dollow Ado in Ethiopia, and Mandera in Kenya to enhance social cohesion between Marehan and Murule clans. These two clans live in the Mandera Triangle and share both social and natural resources across the international boundaries, which has often caused conflicts between them. The Murule community blames the Marehan community for aiding Al Shabaab, which operate in villages along the Somali side of the border. As Marehan elder, Idris Adan stated, “Our Murule brothers continue to blame us for matters beyond our control – terror killings by Al Shabaab. In fact, the Marehan community suffers the most and has even lost many elders as a result of violent extremism. We encourage our colleagues to accept realities and help us in the fight against terror.” On the other hand, the Marehan community accuses the Murule of pitting Kenyan security agents against their families residing in Mandera.

Following a series of trust-building dialogues supported by RASMI, the two communities have become more resilient to conflict incidences and are not easily provoked to retaliatory actions. In these meetings, communities understood how revenge killings hamper the resolution of conflicts, lead to more deaths, and hinder reconciliation. Traditional leaders present at the dialogues, agree to mobilize their communities, dissuade them from participating in retaliatory attacks, and opt for dialogue processes to manage conflicts. Abdille Sheikh Billow, a Murule elder, observed, “This forum has come at a time when the two communities are at peace and this means we can have open and honest discussions on contentious issues that usually disrupt social cohesion.” It has been the practice that agreements reached during the peak of violent conflicts are usually entered to quell the violence without intentions of honoring them.

The dialogues have resulted in easing tensions and minimizing displacement of communities when a conflict incident happens. This has allowed the Marehan children who attend school on the Kenyan side of the border to remain in school even after violent conflicts occur and the continuation of cross-border businesses and interactions. The changes in how the two communities now relate to violent incidents speak to the dialogues’ effectiveness in building trust.

For example, the killings of two Murule men in Elwak, Somalia early this year did not spark inter-clan violence, and Marehan elders even participated in their burial. The deceased, who worked as livestock brokers at the Elwak livestock market, were killed by Marehan gunmen at the market. The Marehan community took responsibility for the killings, immediately sent messages of condolences to the victims’ families, and organized dialogues with the Murule clan to discuss the killings and reparations. Additionally, the Marehan quickly apprehended the perpetrators, thus preempting any opportunities for revenge attacks. Similarly, the killing of a Murule elder, who previously served as a Kenya Police Reservist at Fino, in March 2019 along Kenya-Somalia border was not associated with Marehan clan but was squarely blamed on Al Shabaab militia. The Marehan clan elders reached out to the Murule clan after the killing to console them and to encourage them to disseminate accurate information to the villages along the border that are inhabited by the two communities to avoid any possible revenge attacks.