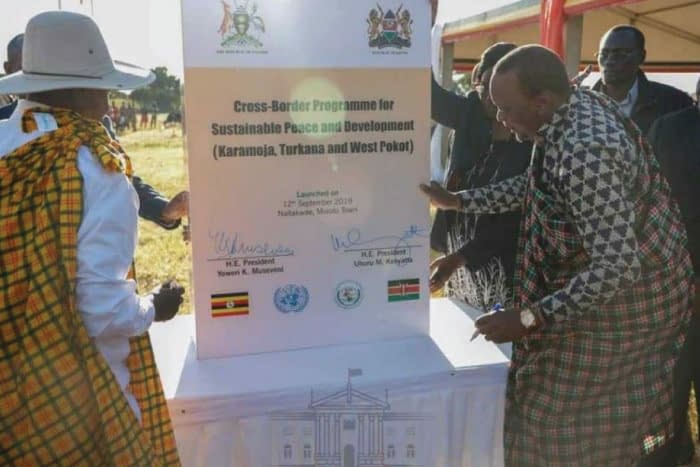 Uganda, Sep 13 – President Uhuru Kenyatta and his Ugandan counterpart Yoweri Museveni on Thursday witnessed the signing of an agreement aimed at promoting sustainable peace and development among Turkana, Pokot and Karamojong communities.

The programme dubbed Cross-Border Sustainable Peace and Development seeks to end hostilities among the three neighbouring communities and enhance development in the region by promoting non-violent interactions and collaborations. The UN-supported intervention that will be led by a ministerial committee co-chaired by Kenya and Uganda will be implemented in the region to reduce tensions resulting from access to shared resources such as water and pasture. Speaking during the launch ceremony in Moroto town, President Kenyatta welcomed the agreement saying it will help spur development in the region which has for many years suffered unnecessary communal conflicts. “This programme, in cooperation with the UN, is a programme that will help all of us to ensure that we have peace, our people live together and also to enable us develop,” the President said.

“Peace is the foundation of all that is good. Where there’s no peace, no development, there’s no wealth that can be made. I want to thank President Museveni for the work he has done here to ensure that this region which was a conflict zone is now a region of peace,” the President said. He called for free movement of people, goods and services across borders of African countries saying the continent can’t develop without free trade. “If you don’t trade, you cannot create wealth. If you do not move, you cannot create wealth. And if you don’t create wealth, all you are doing is institutionalizing poverty. And we want to eliminate poverty from our people,” President Kenyatta said. “Therefore, our coming here today is to demonstrate, first our unity as Kenyans with our Ugandan counterparts and our counterparts in the East African Community,” he continued.

The President, who was accompanied by Cabinet Secretaries Eugene Wamalwa (Devolution), Simon Chelugui (Water) and John Munyes (Mining), said Kenya will develop amenities including schools, dams and health centres on its side of the common border that will be accessible to all communities in the cluster. President Museveni, who spoke in Kiswahili and largely dwelt on development projects implemented by his administration over the years in the Karamoja region, thanked President Kenyatta for the various reforms that have enhanced cross-border trade and people-to-people interactions between Kenya and Uganda. The Ugandan leader singled out reforms at the Port of Mombasa which he said have greatly improved the efficiency of processing and evacuation of Ugandan exports and imports respectively.

On regional connectivity infrastructure, President Museveni called for UN involvement in lobbying donor institutions and development partners to support more regional and inter-country roads. “One of the advocacy points I want you (UN agencies) to help us with are these cross-border roads. We have already succeeded with His Excellency Uhuru with the road from Mbale through Kapchorwa, Suam to Kitale in Kenya. That one is being worked on. “In the same way, we want to work on the road from Moroto through to Kenya. We also need to work on the road from Nakiroro to Kenya. But above all, I want them (UN) to help us with the road crossing through Kenya to Southern Ethiopia,” President Museveni said.

Earlier, the two leaders commissioned the 2.3 million cubic litres Kebebe dam, a community water point that was constructed by the Ugandan government at a cost of 2.5 million US dollars. The dam which is close to the Kenya-Uganda border serves over 1.5 million animals from the pastoralist Turkana and Karamojong communities. Governors John Lonyangapuo (West Pokot) and Josphat Nanok (Turkana) spoke at the launch event that was attended by several senior Kenyan and Ugandan leaders. This article was first published at:: https://www.capitalfm.co.ke/news/2019/09/kenya- uganda-sign-pact-to-end-cross-border-conflicts-between-turkana-pokot-and-karamoja/