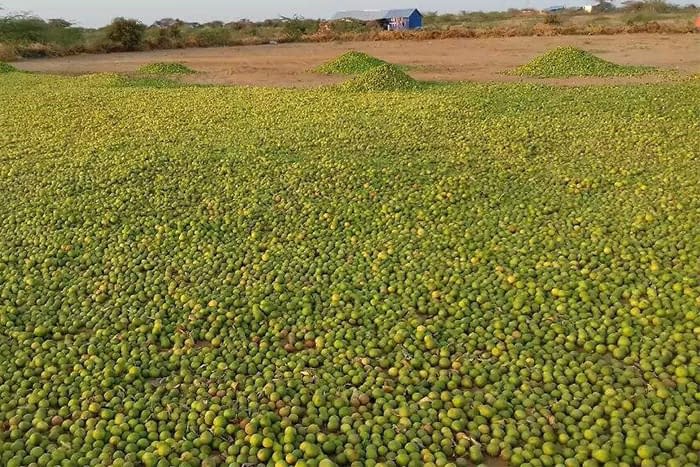 In Western Gedo in Somalia, farming is considered an activity for the less prosperous, merely a means of surviving the dry season. A small-scale farmer with big ambition, Ibrahim Omar has systematically broken this perception and motivated many Gedo residents to invest in commercial lemon farming.

Western Gedo is a region in Somalia with great potential for agricultural production, but for now, it is limited for the most part to pastoralism and subsistence farming. Bushy, poorly maintained small farms dot the area along Rivers Dawa and Juba. Farmers persist in traditional practices and regard farming as merely a means of feeding the family and livestock during the dry season. The Somali adage “beertuu galay” which translates to “he entered the farm” and its implication that he is a ‘loser’ captures the age-old aversion to farming among the locals here well.

In spite of this, one man saw the potential of farms and maximized on it. It is individuals such as Ibrahim Omar that the Building Opportunities for Resilience in the Horn of Africa (BORESHA) project’s grant facility will be looking for – small farmers with big ambition. The prevailing negative view of farming did not deter the enterprising Gedo farmer from venturing into ‘serious’ farming. Ibrahim grew maize on his small farm until he realized that lemons had a good market. In 2006, he started farming lemons commercially. After four years of trial and error, he became adept at growing quality lemons and started supplying fresh lemons to the local markets of Dolow and Belet- Hawa. He then expanded his operations to markets in Dollo Ado and Mandera in neighboring Ethiopia and Kenya. Other farmers were impressed with his growing business. Encouraged by Ibrahim, these farmers set aside portions of their land to grow lemons. Ibrahim not only supplied them with lemon seedlings from his nursery, but he also became their mentor.

By 2010, Ibrahim had gained a reputation in the community as the top lemon grower in the region. For the next four years, his fresh lemon produce from two farms and from those of his extended family dominated the local markets. Other farmers, enticed by the readily available market and good profit margins, followed suit. A new challenge presented itself; though farmers were making good profits, the market was becoming saturated. As the supply of fresh lemons exceeded demand, Ibrahim started to explore other options. In early 2014, he came up with the idea of extending the shelf-life of the surplus lemons by drying them in the sun and transporting them to Mogadishu for export. He used a very simple method to do this: collect the surplus in the market and dry it up in the sun and then weigh and pack until there was a sufficient quantity to transport to Mogadishu. From there, these dried lemons would be exported to the United Arab Emirates (UAE). Whether they are exported from the UAE or used in local diets is not known.

When Ibrahim’s first couple of containers from Mogadishu to the UAE made a good profit, he shared his experience with other farmers and encouraged them to expand their lemon production too. As an incentive, he offered them advance payments on expected produce. This covered their fuel costs for transportation. He also agreed to share his tractor for a small fee and set a minimum price guarantee. As a result of Ibrahim’s initiative, more than 100 farmers in the local area have transformed their farms from subsistence farming to economically viable enterprises. Hundreds are now employed in the dried lemon industry value chain; many of these are women. It is women who dry the lemons – spreading them out and turning them over to get even exposure to sunshine – and then do the selection for local and export markets. Dried lemon is the biggest employer and the sole export earner in the region.

Ibrahim has been successful but he still has challenges. “I need to protect my produce from animals and fences are expensive. Storage is a challenge and I wish I knew how to include new technologies in my business. I hope the BORESHA grant can help me,” he says. Ibrahim is gradually moving from being the trend-setting farmer to becoming a buyer and exporter. He is aware that he can apply for a multi-purpose grant under BORESHA project’s grant facility, and is eagerly awaiting the application date. BORESHA is a 14 million Euros project funded by the European Union Emergency Trust Fund for Africa (EUTF). The project’s overall objective is to promote economic development and greater resilience, particularly among vulnerable groups in the Cross-border area between Kenya, Somalia and Ethiopia. It is planned to run from December 2017 to November 2018. The project adopts a community-driven approach to address the shared nature of the risks and opportunities in this border area. It is implemented by a consortium of agencies: the Danish Refugee Council, WYG, World Vision International and CARE International.

Omar Osman is the Business Development Support Center (BDSC) coordinator of the BORESHA project. He is a private sector engagement specialist with extensive regional experience.