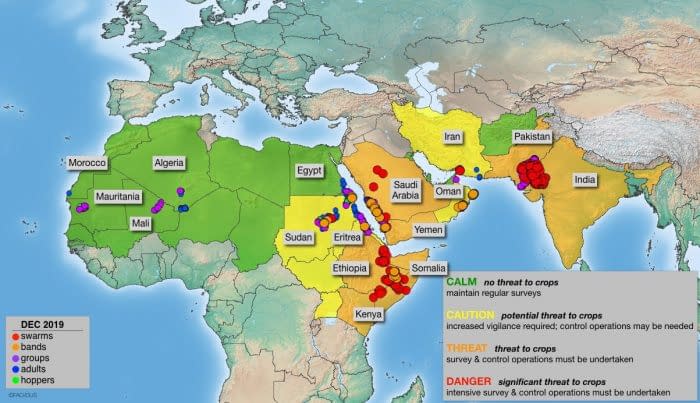 Countries must take immediate action to control the outbreak

Nairobi, Kenya, 15th January, 2020 – A serious and widespread Desert Locust outbreak is destroying crops and pasture across eastern Ethiopia and neighbouring areas of Somalia, parts of Sudan, Eritrea and northern Kenya with a high risk of further spread in the absence of immediate and significant scale up in control activities. There is a risk that some swarms could appear in northeast Uganda, southeast South Sudan and southwest Ethiopia. According to FAO, this is the worst situation in 25 years and unusual weather and climate conditions have contributed to it, including heavy and widespread rains since October 2019. A further increase in locust swarms is likely to continue until about June due to the continuation of favourable ecological conditions for Locust breeding.

There has been a significant and extremely dangerous increase in swarm activity during the past week in Kenya where numerous, large immature swarms are spreading from the initial invasion areas of the northeast (Mandera county) south to Wajir and Garissa, west along the Ethiopian border (Moyale and Marsabit counties) and southwest into central areas north of Mt Kenya (Isiolo, Samburu, Meru and most recently Laikipia counties). One immature swarm was 60 km long by 40 km wide in the northeast. More swarms are expected to occur in these areas, some of which are already moving north of Mt. Kenya westwards to the Rift Valley (Baringo county) where they could continue northwest to Turkana county, while others will move west along the Ethiopian border, and some swarms could move further south to Tana River county.

“IGAD calls on its Member States, the East African Community and partners to pull resources together to prevent, control and possibly eradicate the Desert Locust threat to the food security of the region”. “Prevention and control measures must be scaled up to contain further spread of the Desert Locust”. “Countries must act urgently to avoid a food security crisis in the region” said Dr Workneh Gebeyehu, IGAD’s Executive Secretary.

Dr David Phiri, FAO Sub regional Coordinator for the Eastern and Representative of the African Union and the United Nations Economic Commission for Africa warned, ‘the locust is making the bad food security situation worse in the sub-region, exacerbating the existing dire food insecurity and malnutrition in the sub-region. He added that the weather seems favourable for the locust breeding with high probability that the locust will continue to breed until March-April 2020, if no longer’. The Governor of Mandera County in Kenya H. E. Ali Roba issued a press statement via the Mandera Media Agency on the 8th of January 2020 “Unfortunately counties are ill prepared technically, financially and we lack the capacity and expertise to handle such disastrous invasion by locusts.” He added, “Mandera is a vast county with over 26,000 square kilometres and desperately requires a simultaneous multi-agency approach in all its sub-counties to salvage the situation as it is right now”.

The Desert Locust is the most dangerous of the nearly one dozen species of locusts. It is normally present in the desert areas across 20 countries between West Africa and India, covering nearly 16 million square kilometers. Green vegetation and moist sandy soils are favored for breeding. A typical desert locust swarm can contain up to 150 million locusts per square kilometer. Swarms migrate with the wind and can cover 100 to 150 kilometers in a day. An average swarm can destroy as much food crops in a day as is sufficient to feed 2,500 people and pasture biomass. 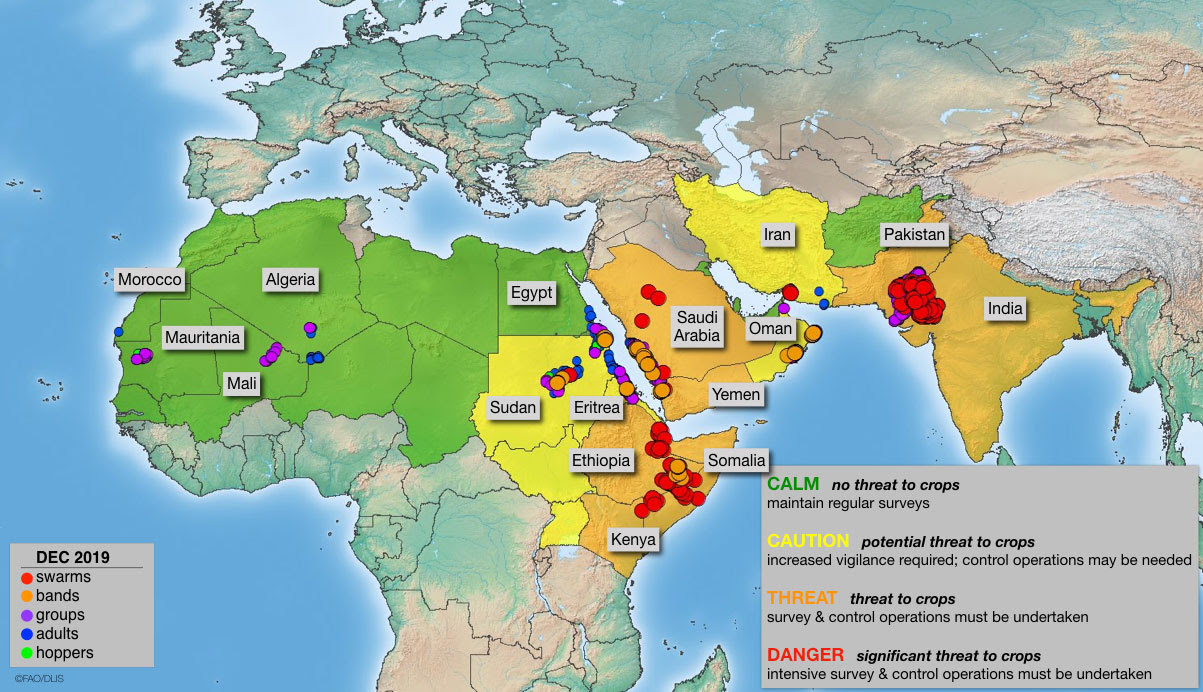 Based on reported locations, wind direction and speed, and forecasted moisture conditions. 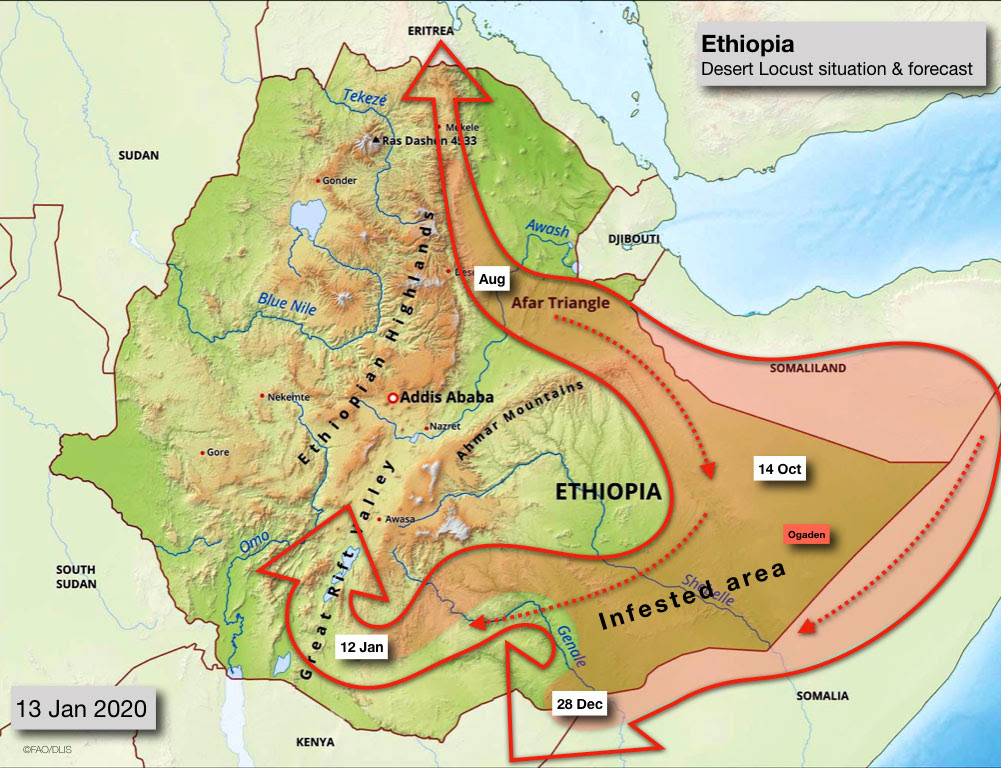 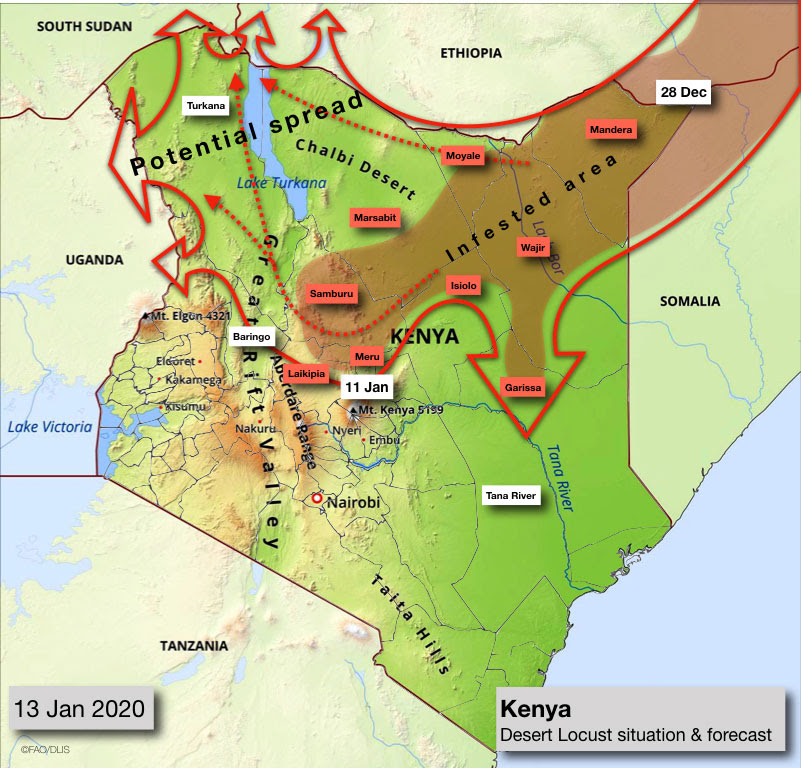 Note to editors on the Food Security and Nutrition Working Group:

The Food Security and Nutrition Working Group (FSNWG) is a regional platform, currently co-chaired by ICPAC and FAO. It’s goal is twofold: Providing an up-to-date food security and nutrition situation analysis (early warning) and offering a forum to build consensus on critical issues facing policy and interventions The FNSWG has served regional governments, donors, and non-governmental agencies since the early 2000’s. Current membership includes approximately 80 organizations (IGAD, UN agencies, NGOs, donors and research institutions) who contribute to the operation and content of the working group and its nutrition, markets, food security information, livestock and pastoralist subgroups.