The South Sudan Country Programming Paper (CPP) for ending drought emergencies was finalized in 2014. The CPP is in line with the IGAD Drought Disaster Resilience and Sustainability Initiative (IDDRSI) 15-year regional strategy to end drought emergencies.

The South Sudan CPP identifies areas of intervention at national and regional level to sustainably build resilience to drought. The CPP serves as a planning, coordination and resource mobilization tool for projects and investments required to contribute to ending drought emergencies in the region. The strategic direction of the CPP is a two pronged integrated approach: first to break the cycles of emergency through instituting mechanisms for long-term resilience and secondly to realise the latent potential of the dry lands that are most affected. The CPP is therefore in alignment to the broader national thrust of moving the nation out of fragility through addressing both the emergency issues and the underlying causes that undergird vulnerability and perpetuate poverty.

The Republic of South Sudan is bordered by Sudan to the north, Ethiopia to the east, and Kenya and Uganda and Democratic Republic of the Congo to the south and west, respectively. It covers an approximate area of 658,000 sq. km (including Abyei).

South Sudan emanated from Africa’s most protracted war with the signing of the comprehensive peace agreement in 2005 and thereafter transitioning from the status of autonomy to full independence in July 2011 following a referendum on self-determination.

The population is projected at 12.2 million people (NBS Projection, 2018). South Sudan, unlike most other countries emerging from protracted conflict, is endowed with immense agricultural resources offering great potential for the country and for the region that is generally food deficit. The country boasts diverse agro-ecological zones of which 50% are prime land, but a full 80% is arable suitable for growing a wide range of food and cash crops.

Data from the National Household Baseline Survey 2009 (NHBS) show drought and floods are pervading shocks in South Sudan with over half (56%) of the population affected. Drought and floods are the most common natural hazards in all zones other than the Greenbelt, with some zones more drought prone than others (Muchomba and Sharp 2007).

South Sudan is highly shock-prone. The range of different shocks correlate with those of the wider region, yet indicate a country with unique sociocultural, political, economic and ecological character. Key shocks identified here include insecurity and violence including the December 2013 and July 2016 violent conflicts, economic crisis and high food prices, and natural shocks such as floods, drought, animal and crop diseases

The highest levels of poverty are found in the most drought prone areas of South Sudan. Poverty is concentrated along the northern Sudano-Sahelian dry, sub-humid and semi-arid belt that stretches across Northern Bahr el Ghazal, where 75.6% of the population lives below the poverty line, Unity (68.4%), and Warrap (64.2%). Other areas of significant concentration of poverty include Lakes State (48.3%) and Eastern Equatoria (49%) and Jonglei (48.3%), the latter two states being the most arid and most drought prone in the country. In terms of food insecurity, in 2011 the five states that were most severely affected were the drought prone states of Eastern Equatoria, Warrap, Northern Bahr el Ghazal, Lakes and Jonglei.

Several policy documents have been developed to facilitate the implementation of the IDDRSI strategy. Some of these are the Comprehensive Agricultural Master Plan (CAMP), the Irrigation Development Master Plan (IDMP) and the South Sudan National Development Strategy (2018-2021). IDMP was tabled at the Cabinet and is awaiting approval and blessing by Cabinet and Parliament respectively as part of the adoption process. Absence of adoption of the CPP support documents can lead to limited translation of the strategy into well-defined strategic activities and programs. At the national level, the most significant adaptation goals are set out in the National Adaptation Plan of Action (NAPA) for South Sudan. Under the United Nations Framework Convention on Climate Change, NAPA provides “a process for Least Developed Countries to identify priority activities that respond to their urgent and immediate needs to adapt to climate change.

An Inter-Ministerial Steering Committee: Which will be constituted by all the Ministers of all the relevant ministries, as the highest decision making organ. The key functions of the Steering Committee will be provision of political support and policy directives, approval of resource utilisation, linkage to the Council of Ministers and Parliament.
A Technical Committee: Constituted of the Undersecretaries and Heads of participating Ministries, and agencies, key technical development partners, CSOs, private sector and the head of the secretariat within Ministry of Environment. The main functions of the Technical Committee will include supervision of the implementation of the CPP, guiding resource mobilisation and coordinate resource allocation, monitoring progress, and reporting to the Inter-Ministerial Steering Committee.
A Task Team: This will be multi-sectorial and multi-stakeholder in constitution, with leadership from within government. The membership will include middle level/ technical staff from government ministries and agencies, focal points from each State, expert(s) (technical assistance from IGAD and other development partners) and technical representatives from CSOs, NGOs and private sector.
At the component level: Designated lead ministries and agencies will coordinate the technical stakeholders, thus: Ministry of Environment and Forestry will lead on the Natural Resources and Environmental Management component; Ministry of Trade and Industry will provide the lead on the Market Access, Trade and Financial Services component; Ministry of Agriculture and Food Security will lead on Enhanced Production and Livelihood Diversification component; Ministry of Livestock and Fisheries will lead on Pastoral Disaster Risk Management; University of Juba will lead on the Research and Knowledge Management and Technology Transfer component; Peace and Reconciliation Commission will lead on Peace Building, Conflict Resolution and Development component; Coordination, Institutional Strengthening and Partnerships component will be led by Ministry of Foreign Affairs and International Cooperation; Ministry of General Education will lead on Human Capital, Gender and Social Development component. 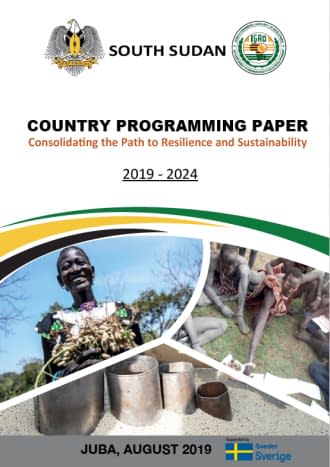