The Ethiopia Country Programming Paper (CPP) was developed in 2012 under the leadership of the Ministry of Agriculture, after the establishment of IGAD Drought Resilience and Sustainability Initiative (IDDRSI). The CPP was developed by a National Technical Committee comprising the various Directorates of the Ministry, namely the Agricultural Extension, Planning and Programming, Natural Resource Management, Food Security Coordination, Early Warning and Response, Animal and Plant Health Regulatory Directorates and the respective Directorates from the Ministry of Water and Energy and Ministry of Federal Affairs.

In the first phase of the CPP implementation, different emerging issues were identified. These include; migration and displacement, technological evolution, cross-border development issues, which are emphasized in the revision of the previous CPP. Accordingly, the Ethiopia Programming Paper has been revised by the National Task Team (NTT) established from concerned Ministries. The NTT thoroughly revised the previous CPP based on the mandate areas of each ministry and proposed new ideas for PIAs for the next phase of DRI.

In Ethiopia recurrent drought is largely due to climate variability and its impact results in widespread failure of seasonal crops, pasture and forage and massive death of livestock in pastoralist areas, and thereby results widespread hunger among the affected population. More recently, the drought of 2015 caused hunger for a population of about 10 million people (10%) estimate based on the number of people requiring food aid. However, nowadays, drought is more often viewed as a natural event that requires government to take a proactive approach to reduce societal vulnerability and increase resilience to drought through sustainable development interventions. The Government of Ethiopia has laid strong foundations through its policies and strategies which offer a fertile ground for undertaking development activities in the ASAL.

With 60 percent of the land area and 12–14 percent of the population—mostly pastoral and agro-pastoral communities—the lowlands lag behind the rest of Ethiopia in terms of most social and economic indicators. Literacy rates, access to formal education, and access to water and sanitation are all well below national averages in the ASAL areas. Besides, the current productivity of livestock (for meat and dairy) raised by pastoral communities and of dry land agriculture as practiced by agro-pastoral communities is very low compared to national and regional standards. At the same time, poor public infrastructure in the ASALs for example, roads, market facilities, and telecommunication makes it difficult for producers to connect to lucrative national, regional, and international markets.

To meet emerging market demand and increase household incomes, productivity and commercialization must be enhanced. Pastoral and Agro-Pastoral Livelihoods are highly vulnerable to climatic shocks (primarily drought), conflict, insecurity, and animal pests and diseases. The deterioration of rangelands, encroachments of invasive species on pasture land, increase in human and livestock populations, and limitations on mobility are among others creating an urgent need to increase resilience in pastoral production systems.

The CPP is firmly anchored to the Government’s 5-year Growth and Transformation Plan (GTP). In (2010) the Government of Ethiopia (GoE) has come up with a revised Disaster Risk Management (DRM) policy which is already in practice and whose overall objective is to reduce the risks and impacts of disasters through the establishment of a comprehensive and integrated disaster risk management system within the context of sustainable development. The DRM Strategic Framework and Investment Program (DRMSFIP) is currently under development and will be in place after it has been approved. It will be based on the revised DRM policy and on the priorities enshrined in the Hyogo Framework for Action (HFA).

As a complementary measure the government has developed and implemented the Ethiopian Sustainable Land Management Investment Framework (ESIF) with the aim of alleviating rural poverty through restoring, sustaining and enhancing the productive capacity, protective functions and biodiversity of Ethiopia’s natural ecosystem resources.

There are two established project coordination units in the Ministry of Agriculture for some of the drought resilience initiatives. These units are accountable to the State Minister of Agriculture. The drought resilience initiatives are oversighted by the steering committee comprised of about 13 sectoral institutions whereby the IGAD IDDRSI National Coordinator is an observer member.

On the other side there is a Rural Economic Development and Food Security (RED&FS), which is an agricultural sector Public-Development Partner platform where by it has an executive committee chaired by the Minister and co-chaired by the two nominated Development Partners. RED&FS has three technical committees with task forces, including the pastoral task force that deals with the drought resilience initiatives, and is focused on experience sharing, harmonization and coordination.

The National Disaster Risk Management Commission (NDRMC) – through the Drought Management Platform – is coordinates humanitarian assistance (food relief), while the agricultural related emergency response interventions (crop and livestock) are coordinated by the respective departments of the Ministry of Agriculture and the Food and Agriculture Organization.

The Ministry of Agriculture is a place where the drought resilience initiatives are hosted in, while, The Ministry of Peace is also responsible to coordinate the World Bank funded Lowland Areas Resilience Project.  Beyond this, there are resilience building interventions in other sectors e.g. water, health, education, environment etc. 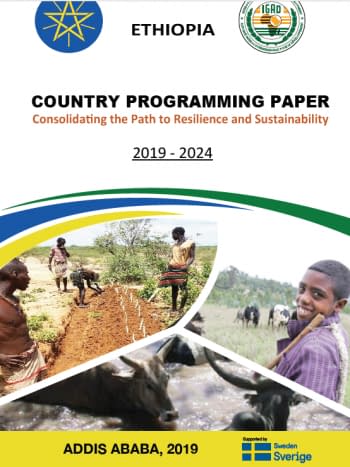 Statement by Ethiopia on 8thGA