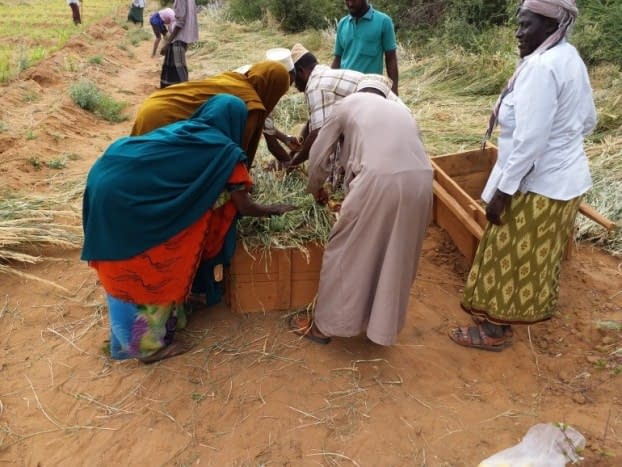 By Paul Mutungi, Sven Simonsen and Mohamed Mohamud Pastoralists in Mandera County, in North Eastern Kenya, are learning how to increase pasture production and improve pasture conservation and utilization through the Agro Pastoral Field School (APFS) approach.    Climate change can cause long-lasting, more frequent dry spells – a particular problem for pastoralists in the Horn of Africa that often leads to livestock losses, increased food insecurity and spiraling poverty. In Mandera County in northeastern Kenya, FAO is supporting pastoralists to grow pasture for livestock to strengthen households’ resilience to drought. “Like any other crop, pasture can be grown, nurtured and stored for use in times of need, allowing for a great rate of recovery of degraded land when rested,” says FAO Livestock and Pastoralism Officer Paul Opio. Composed of arid and semi-arid areas, Mandera County forms part of a cross-border region between Ethiopia, Kenya and Somalia. On all three cross-border sides pastoralist communities are faced with severe livestock feed shortages and are highly vulnerable to recurrent droughts, which degrade rangelands and reduce access to traditional grazing areas. Hands-on learning In Mandera, hands-on learning methods for producing, managing and utilizing fodder are taught through an APFS – a ‘school without walls’, where groups of 20-30 agro-pastoralists engage in experiential and participatory learning sessions. A total of ten APFS groups have been formed across five project sites. The activities are part of a Partnership Programme on drought resilience between FAO and the Intergovernmental Authority on Development (IGAD), implemented since 2016 together with the Agency for Technical Cooperation and Development (ACTED) in Kenya, the Mandera County Government, and funded by the Swiss Agency for Development and Cooperation (SDC). The programme is implemented along the Ethiopia, Kenya and Somalia borders including selected cross-border locations of Liben-Ethiopia, Mandera-Kenya and Gedo-Somalia among ethnic Somalis. The target areas also encompass the watershed of the Dauwa River which forms part of the Ethiopia-Somalia and Ethiopia-Kenya border. It addresses the broad thematic areas of transboundary animal diseases, cross-border marketing and trade, natural resources management, conflict, gender and nutrition. 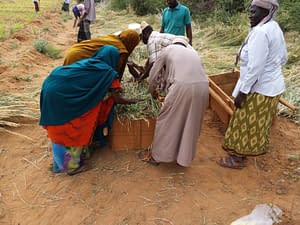 What is APFS? It is a “school without walls” where a group of 15-25 farmers/pastoralists engage in a process of hands-on experiential and participatory learning over a season/production cycle to improve a specific enterprise (e.g. cattle/small stock production, fodder/pasture production and management, and beekeeping). Needs and opportunities for livelihood improvement are identified through a consultative process with the community before and during APFS implementation. The APFS group meets regularly and frequently (weekly in most APFS) to learn, test and adapt new concepts and promising interventions for local use. The group actively learns through comparative experimentation of local practices with new ideas through trials, observation, critical analysis and discussion. In the process, the APFS group members acquire technical skills, improve their understanding of value chains and define opportunities for business and enterprise development. They also develop and design strategies for improving livelihoods through improved cohesion. This strengthens group community action plans, establish new linkages with service providers and private sector actors to strengthen their preferred enterprises and improve their livelihoods. 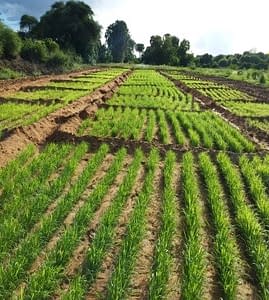 Involving women Men, women and youth all take part equally during APFS learning sessions. Shanqaray Hassan Mohamed, Vice Chair of one of the Girissa APFS groups in Mandera, said this has helped overcome traditional barriers:  “Women and youth have benefited from experimenting as well as from the learning process. Initially, they were not part of decision-making in the community. With the APFS, women are able to produce, store and sell hay bales and are therefore no longer dependent on men for most of their upkeep. We have successfully replicated fodder production in our farms, improving our output and enhancing our living standards.” Production phases At the field school, participants study each stage of feed production and preservation: from preparing the land to planting seeds, whether to water by rain or irrigation, observing growth through agro-ecosystem analysis, up to harvesting, preserving and storing pasture seeds and hay bales. The learning cycle takes four months to complete and can be undertaken twice a year, matching the rainy seasons. Farmers are also taught the best ways to remove invasive weeds, notably Prosopis spp. which is accelerating the rate of degradation of rangeland ecosystems. Learning by experimenting APFS use comparative experimentation as a key learning method. For example, two similar planted plots can be treated in different ways – one with manure and one without, but both receiving the same amount of water. Participants observe how adding manure results in greater production over the various stages of development, while analyzing and discussing innovative and problem-solving techniques. New methods to improve breeding and animal husbandry practices are also introduced and explored. A lot more resilient Khalif Ibrahim Barrow, focal point for the Mandera County FAO/IGAD Partnership Programme, summed up the benefits of field schools: “As a result of the APFS, we are seeing improved pasture availability and restoration of degraded lands, while livestock body conditions have improved and mortality has been reduced. For pastoralist families, food security is improved and incomes are higher. In short, communities have become a lot more resilient.”   Paul Mutungi is a member of the FAO Resilience Team for Eastern Africa, where he works as the Regional field School Support Officer.  Sven Simonsen is the Communications Officer for the team. Mohamed Mohamud is the Field School Master Trainer with the Mandera County Government.   This article was first published by FAO: http://www.fao.org/emergencies/fao-in-action/stories/stories-detail/en/c/1170759/